Free Private Cities (FPCs) is a revolutionary concept that stands to make the world safer and more prosperous. FPCs provide a practical solution for dysfunctional governments and struggling economies. Some of their functional elements are already being put into practice in projects such as Próspera and Morazán in Honduras, and the movement in support of FPCs is gaining momentum worldwide.

A FPC is a highly autonomous region within a host country with its own rules and laws. It’s run by a company known as a “City Operator”. This Operator has a profit motive and the possibility of having shareholders. For an annual fee – which will be kept low due to competition with other cities – Operators provide governmental services like justice, infrastructure and security to their residents.

Although FPCs are a relatively new concept, there are many successful predecessors that have sought to keep government intervention minimal and individual rights strong. The great liberalization of China started in 1979 when the government designated four small cities as Special Economic Zones (SEZ). These zones quickly developed into big cities thanks to fewer regulations and a more business-friendly climate. Many other countries have been following suit. FPCs take the economically liberal policies of SEZs further.

Enormous innovation has taken place in all sectors of society during the last century, with the exception of governance.

FPCs are like start-up countries. They will show great innovation in governance just like start-up companies in Silicon Valley do in technology. They will encourage a transition from overspending to cost cutting, from broken election promises to accountability, from short-term to long-term thinking, and from legal uncertainty to legal certainty.

Because FPCs minimize regulation, businesses will enjoy enormous freedom to innovate in fields such as biotech, solar, nano, robotics and energy.

Suppose your car repair shop suddenly tried to charge you more than you had originally agreed to pay. Of course, you would be outraged and would refuse to pay the extra requested. Governments today operate on the same principles as a dodgy car repairman.

Governments can change laws unilaterally. There are currently no countries where citizens have a mutual agreement with their government stipulating what they must pay in taxes and what services they will receive in return. In countries like the US, this has caused the regulatory burden to explode in length and complexity during the past century. The US tax code Federal Tax Code alone has grown from just 504 pages in 1939 to more than 74600 pages in 2014: a 150-fold increase. This has led to increased uncertainty for citizens because, with so many laws, it’s impossible for citizens to know them all. It is estimated that the average US citizen unknowingly commits three felonies a day.

FPCs offer much higher legal certainty. City Operators offer a clear contract guarantees from third party legal arbitration. Those that do not will find themselves without customers. Unlike politicians, FPC Operators cannot just break promises. They are held legally accountable, and if they refuse to submit to court decisions their reputation suffers gravely and they go bankrupt.

In a world with multiple Free Private Cities, citizens will be free to choose where to relocate. They will be able to move to cities with fee-levels, regulations and forms of service that suit them best. Every new FPC that is established will compete on the “market for living together”, increasing the options available to all. Since they can be as small as a few square kilometers, we could see the creation of hundreds of FPCs seeking our business. Instead of voting with our pencil – as we do during elections – we can vote with our feet, just like we do every day when we choose goods and services to buy. Right now, the level of competition in governance is low: there are only 200 countries in the world for 7 billion people. Free Private Cities will disrupt the market for governance.

Since FPCs are contract-based societies, there will be no need for “politics”, elections or endless struggles for claims to “public” resources. Because FPCs minimize regulation and keep costs low, there is no point in quarreling with other residents over what policies to pursue.

Does the government rule your life? It seems fair to say it does. But do you rule the government? Most of us would answer “no” to this question. It is hard for most of us individually to hold politicians accountable. If our politicians break election promises, start foreign wars under false pretenses or print new money to fund their projects there isn’t much the average citizen can do.

The market works much better even though companies do not offer democratic participation. Few iPhone buyers feel the need to buy Apple shares so they can have a minute influence on the course of the company. The right to walk away – to refuse to buy – is the best guarantee that companies will behave decently.

FPCs differ from traditional nation states in that they are directly subject to the discipline of the market. Their relationships with their customers and good reputation are essential to them. Their residents are customers who can walk out and take their money elsewhere, instead of government subjects who are only allowed to cast a negligible vote every four to five years.

FPCs will become beacons of liberty, prosperity and civilization. To attract residents, workers and companies they will have to offer low costs, a safe environment, legal certainty, and maximal individual and economic freedom. Enforcing regulation is costly and those costs would have to be passed on to residents. Therefore, we estimate that around 95% of the current regulatory burden will prove to be a net hindrance. In Free Private Cities, there will be a tendency for rules and regulations to be kept as simple as possible.

FPCs will allow freedom of speech, contract, association and markets. It is in the interest of Free Private City Operators not to tell companies what their prices or salaries should be, how individuals should be insured against unemployment or old age, what children should learn at school, what medical treatment patients are allowed to pursue, what the conditions of rental contracts should be, or which professional licensing laws should be in place.

6. A safe haven for minorities and refugees

Consider a FPC to be a technology: a powerful concept that can bring prosperity and security to an area. FPC can usher in a market for residency offering both rich and poor alike more options for living and working with others. As such, they can function like a global safety valve against dysfunctional or oppressive governments. They offer a real solution for refugees seeking to become valued and respected members of society.

There are currently some 84 million forcibly displaced people worldwide seeking a new home. However, few countries are willing to allow these people access, in part because the nature of existing political structures means that refugee intake can require a net subsidy from governments and tax-paying populations. This is not the case in FPCs, where all new citizen “customers” who are willing to live peacefully amongst others and abide by the city’s rules are welcomed with open arms.

The creation of FPCs in the Middle East, for example, would prove invaluable for many refugees. When we look back at recent history, Hong Kong – a territory that has enjoyed largely minimal government intervention and strong protection of individual rights – was once a destination for hundreds of thousands of refugees from Maoist China and war-torn Vietnam. The system offered in Hong Kong profoundly transformed the lives of these refugees and their families. Due to its minimal level of government intervention, Hong Kong was able to transform itself from an economic backwater to a territory where the average resident earns more than the average resident of its former colonial master, Britain.

In the same way that Hong Kong provided a home for refugees, FPCs would welcome immigrants who are willing to accept the rules and pay the annual fee – which would be kept low and made affordable to newcomers due to the possibility of taking on higher-paying jobs in the FPC, even for less skilled roles. FPCs would not provide welfare or voting rights but would instead offer a chance for a safer, more prosperous life, especially for minorities that are otherwise suppressed.

You can also visit the Beyond Democracy official website here to find out more about Frank’s book. 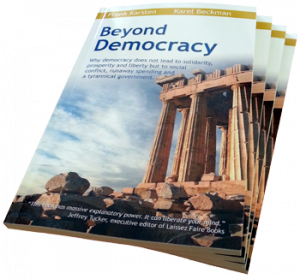 ← What are Free Private Cities? Tales From Cities #1: The Metaverse →