Rosa Amanda Aguilar has a long history with the land that is ZEDE (Zone of Employment and Economic Development) Ciudad Morazán. For many years, she lived less than a kilometer from the spot where she is now growing her business.

This land has always been agricultural land. Thirteen years ago, Rosa lived on the farm with her husband, Rosales Peña, and her three-year-old son Ariel. It was not an easy life. One night, the family was attacked by a gang. They were robbed, but Rosa credits her visible pregnancy with saving them from being injured. Afterward, they moved to another farm that was also near what is now Ciudad Morazán.

Rosa had a daughter, Allison, and then another son, Dario Yandel, six years later. Rosales raises cattle and horses, but it is hard to feed three children and take care of Rosa’s parents, who live with them.

Rosa made a little extra money by selling food out of her home. However, she only had a few occasional customers. Starting even a very small business in Honduras is expensive and time-consuming and exposes the owner to extortion from local gangs.

Meanwhile, the owner of the land near where Rosa had lived was only raising king grass to be used for biofuel. In 2020, he was happy to sell the land to Ciudad Morazán. 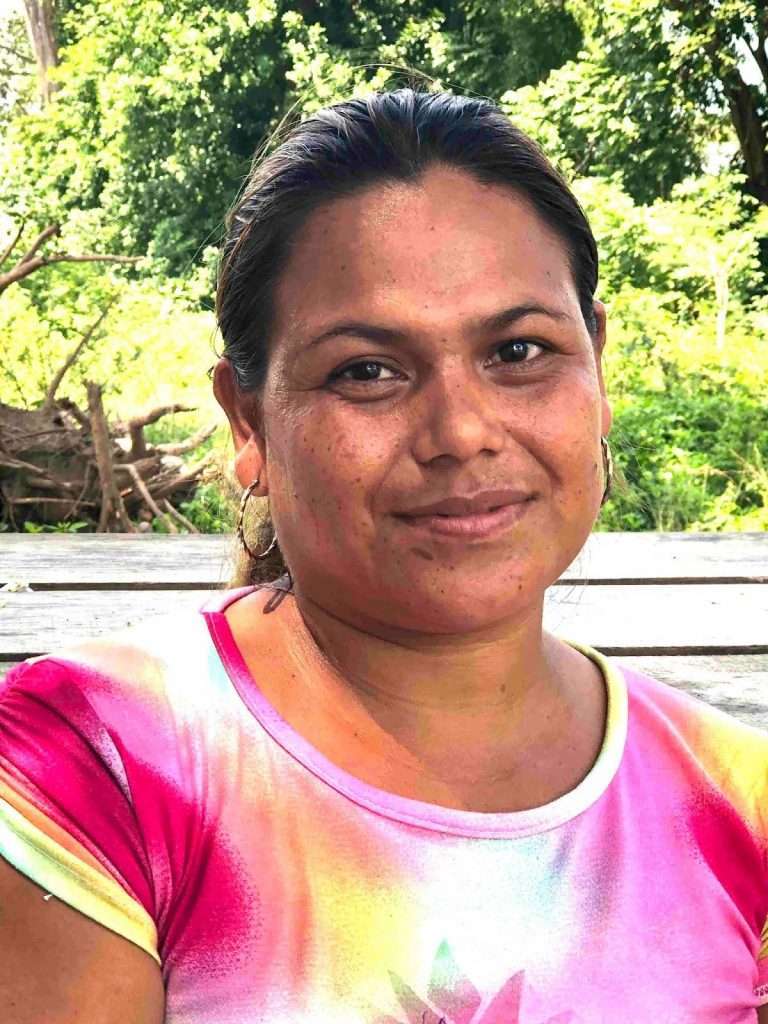 Rosa was close enough to the ZEDE to notice the workers building the first warehouses in late 2020. She saw a need and an opportunity and started carrying drinks and snacks to sell to the workers.

Rosa found a nice shady spot under some trees inside the ZEDE and asked the construction manager if she could sell her products there. Soon after, her mother helped her build a small metal shack so she didn’t have to carry all her products to the site every day. 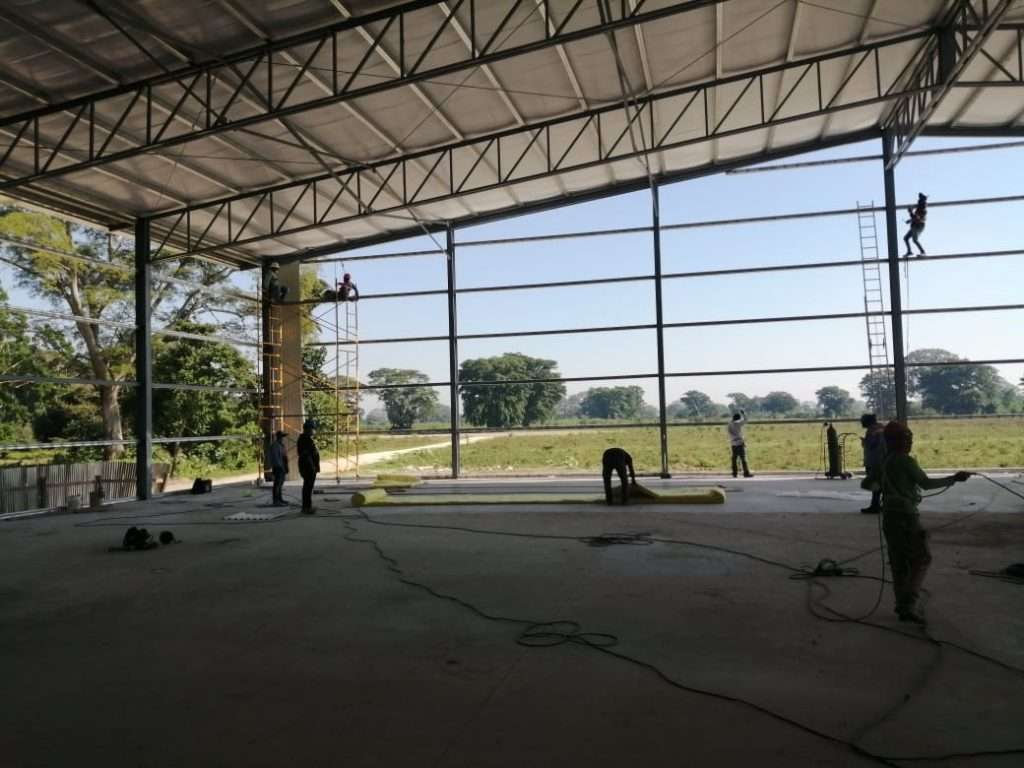 Early construction in the ZEDE 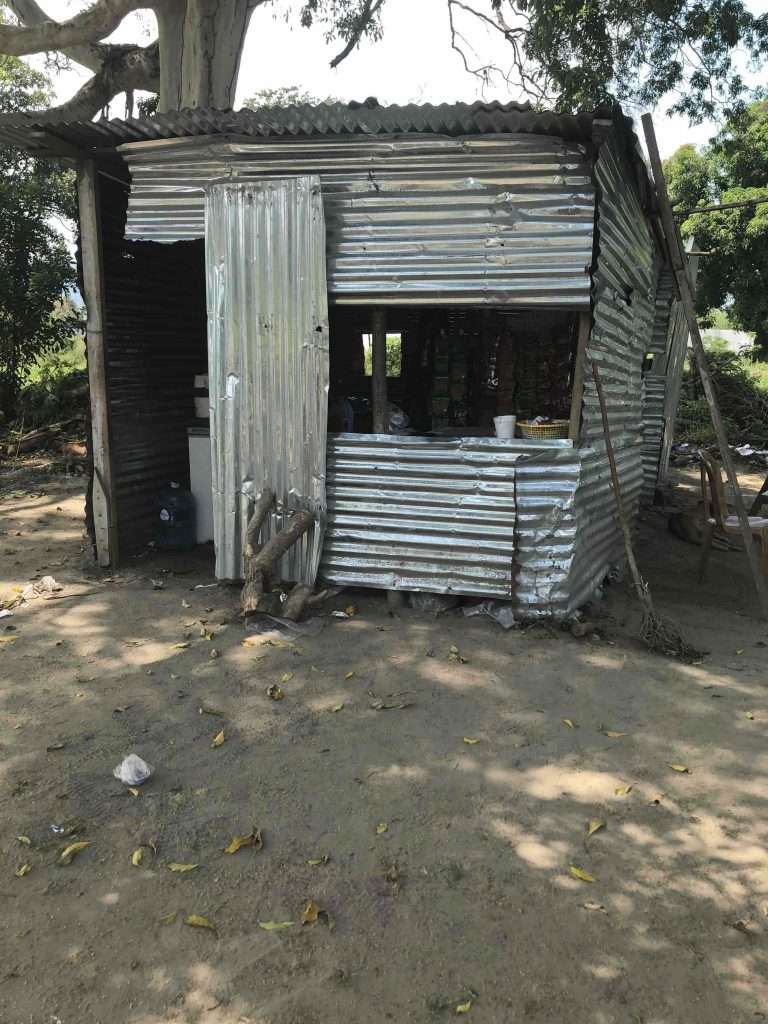 Ciudad Morazán is a community designed to encourage entrepreneurship, so starting a business is fast and inexpensive. Because of the ZEDE’s semiautonomous status, the commercial regulations are simpler than in the rest of Honduras. The tenants choose to enter into voluntary contracts that spell out their rights and responsibilities so they can be sure the rules won’t be changed on them.

Rosa was offered a contract with Ciudad Morazán to rent the space she had chosen for $10 per month. When she understood all the terms of the agreement, she was pleased to agree. The construction manager sent over a couple of workers to make her hut somewhat sturdier. A little later, Rosa added a stove to make lunches and a couple of picnic tables for her customers.

Even before the first residents moved in, Rosa had a good business providing soft drinks, snacks, and lunches to the construction workers. She was happy with her location and the security of her store. Even though Rosa had to carry in ice every day to keep her water and soft drinks cold, she had all she needed. She cheerfully greeted her customers as they came by throughout the day. 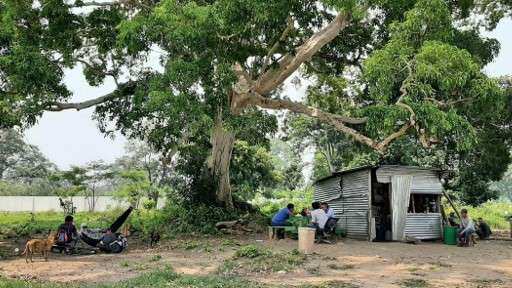 Rosa’s store after its first improvements were made

Rosa was happy to be making enough money to pay off a loan she had taken out sometime before, but she had bigger dreams. Her rental contract only lasted a few months because the management company of Ciudad Morazán had promised that she could rent one of the first two-bedroom homes that were being built. 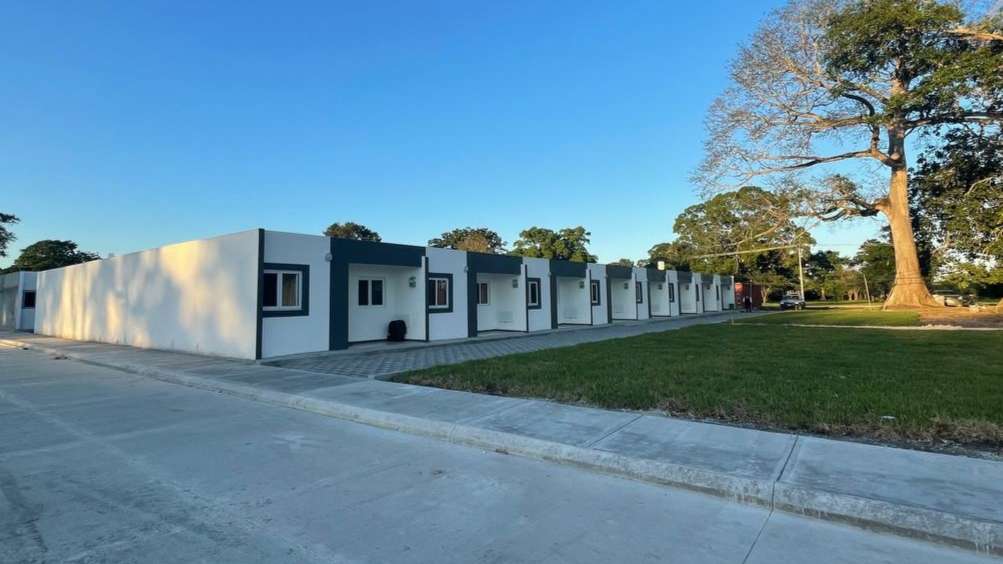 Image of the first eight houses in Ciudad Morazán, Rosa’s shop is on the far right

In September 2021, Rosa rented a house on the corner of Morazán’s first residential block and established a restaurant and small convenience store. Access to electricity for her refrigerators, gas for her stove, and tables and chairs for her customers meant she could run the popular business of her dreams. 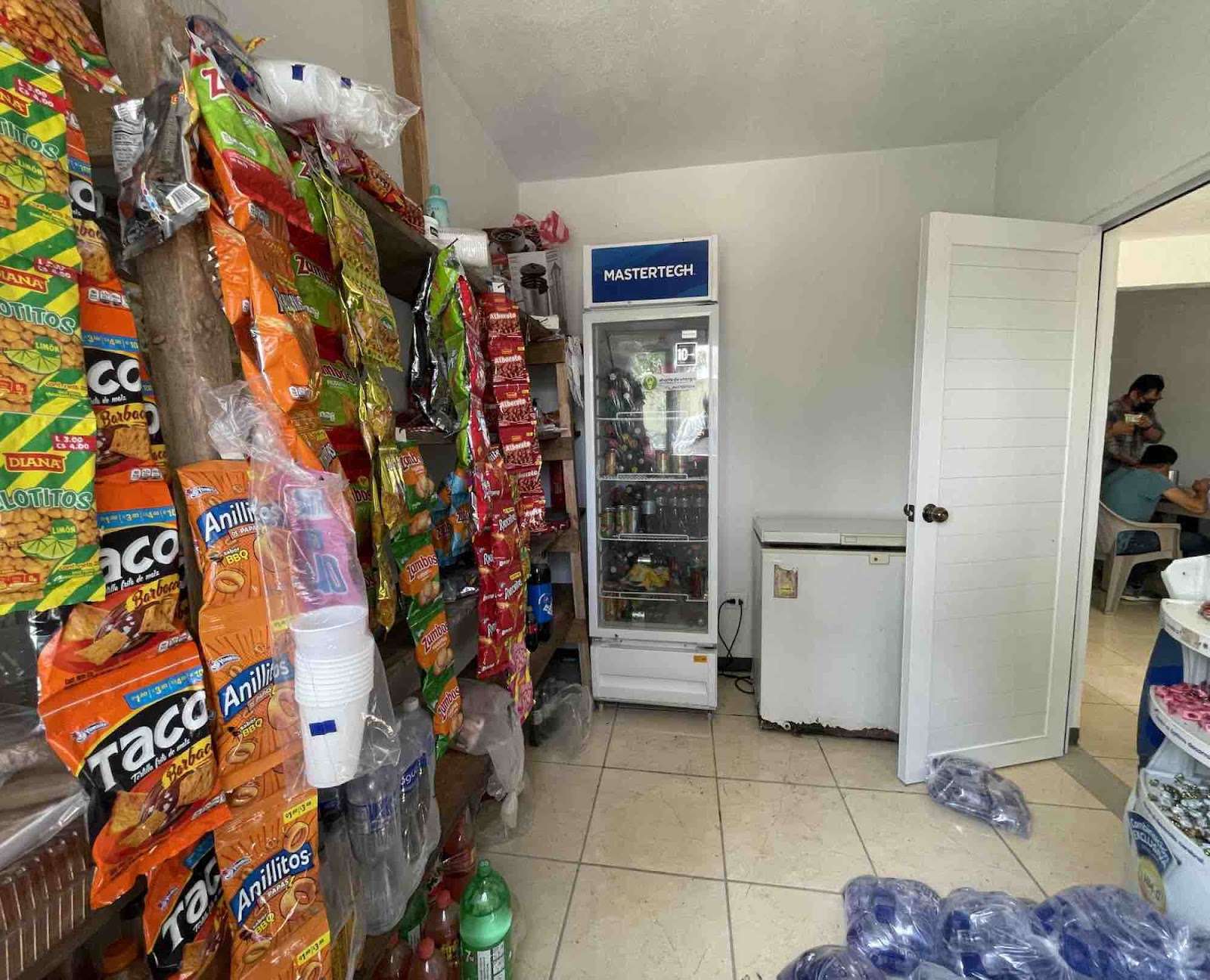 Naturally, there were challenges, as there are for any growing business. Rosa had to learn how to offer credit to some of her customers, and ensure she got paid back. As her business grew, she had to manage her inventory and hire her first employee. Before long she was employing three members of staff. 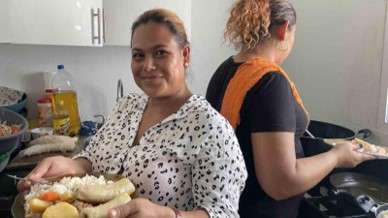 Rosa serving food alongside one of her employees 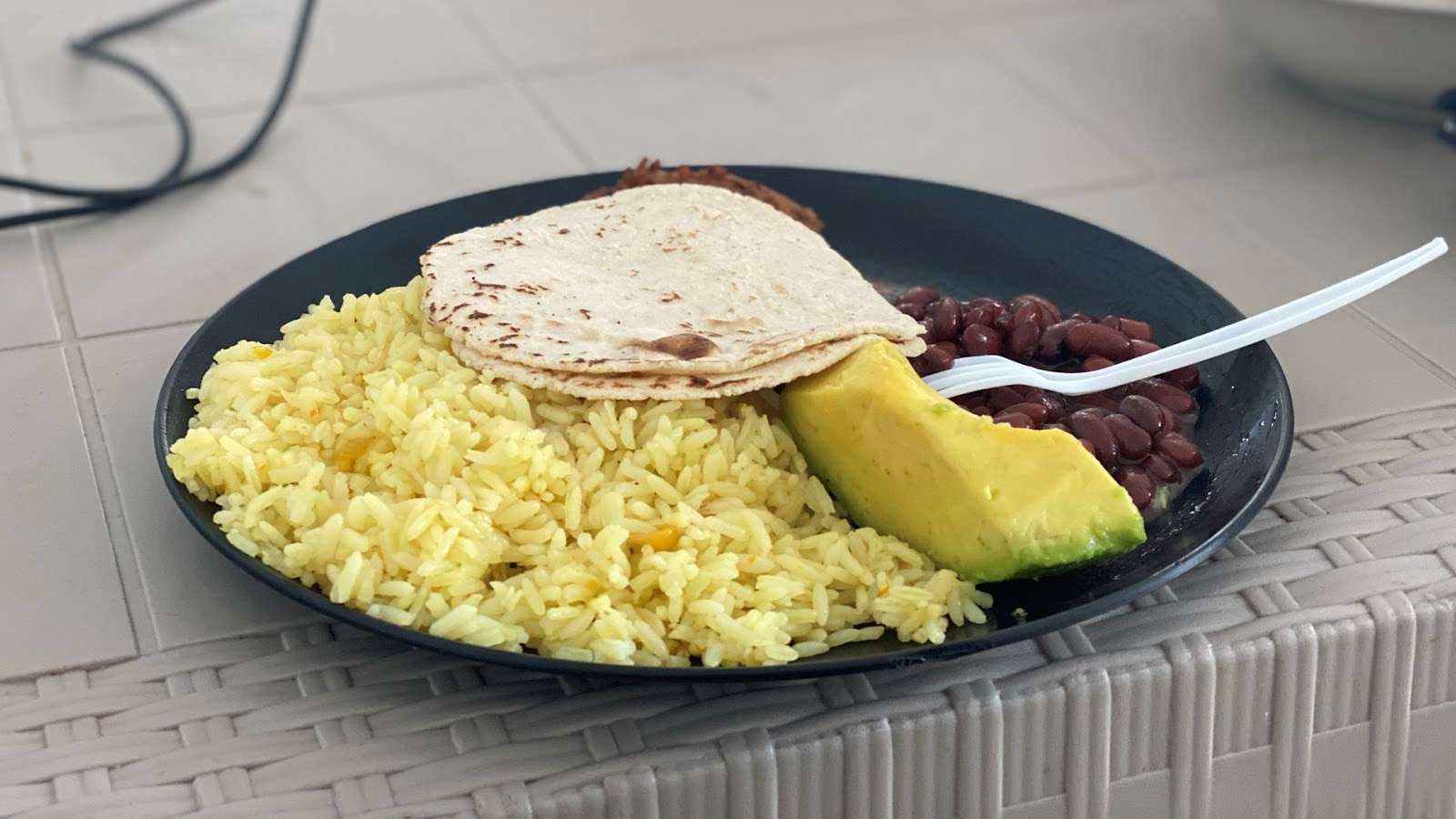 A meal served to workers at Rosa’s restaurant

With hard work and a cheerful personality, Rosa was able to overcome the challenges she faced. When her customers started asking for ice cream, she looked for options to rent a freezer. However, the local freezer vendor was reluctant to take on Rosa as a customer as he didn’t believe she would be able to pay. Rosa proudly invited the vendor to her shop and convinced him she was managing her business well and meeting her customer’s demands. 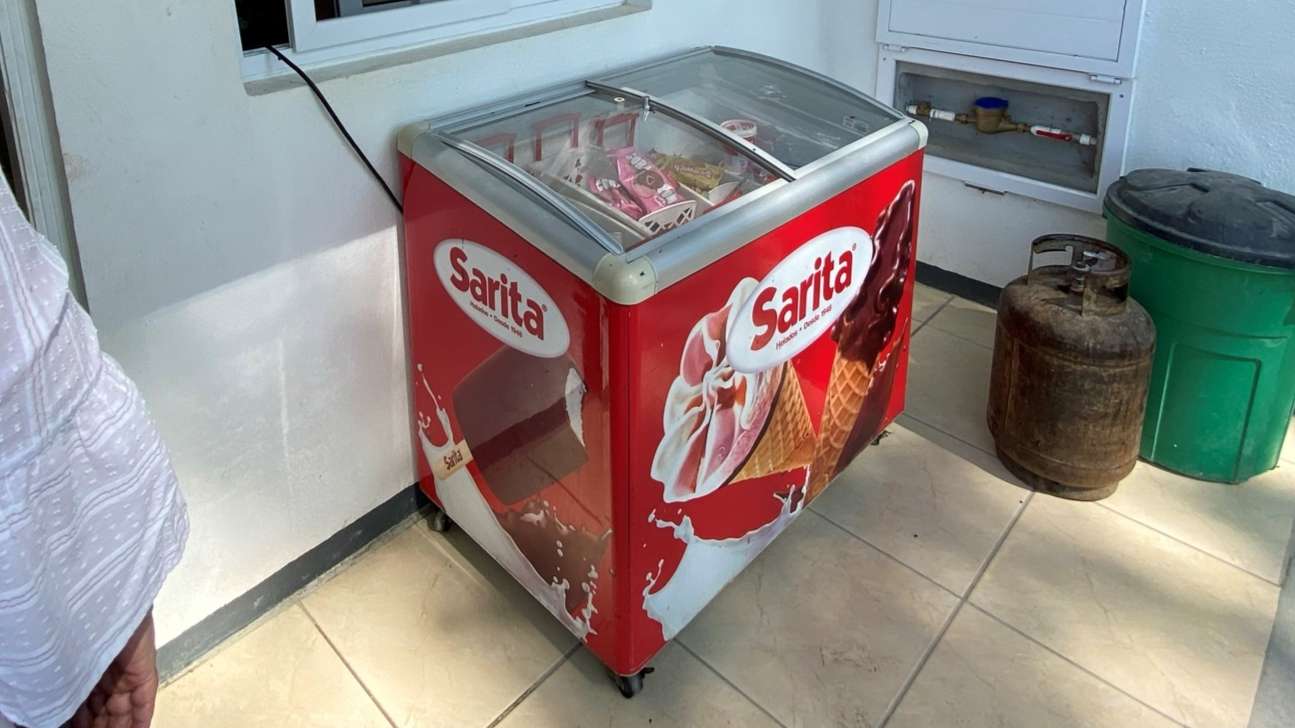 During one heavy rainstorm, a tree fell on a power line, cutting off Rosa’s electricity supply for a day and a half. All her ice creams melted, but she courageously salvaged what she could and sold refrozen products at discounted rates.

In late 2021, there was great interest in Ciudad Morazán among industrial businesses looking to invest in ZEDEs, and many workers showing interest in the security and jobs they provide. Rosa’s future looked bright.

However, Rosa’s biggest challenge proved to be political. In the runup to the election of November 2021, false rumors circulated about the ZEDEs. A fake news story claimed that Ciudad Morazán was evicting people from their homes. Due to her association with the ZEDE, Rosa was abused by people in her neighborhood, who yelled at her from their cars when she was outside Ciudad Morazán’s gate. 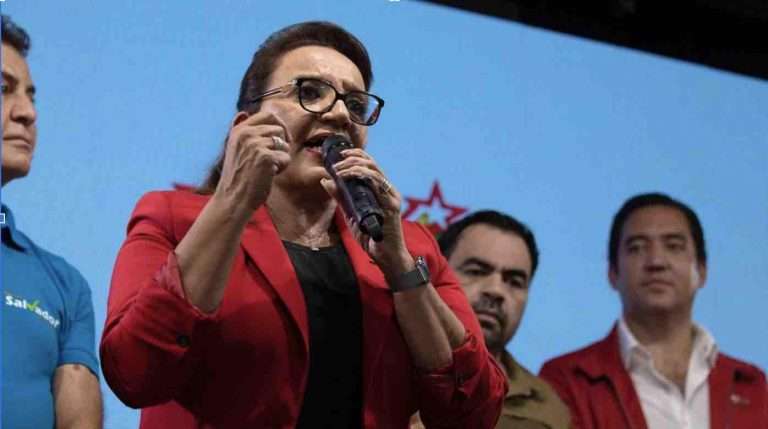 The political uncertainty only increased after the election. Prospective industrial tenants canceled or postponed their plans to bring their businesses and jobs to Ciudad Morazán. The building of the houses continued, but additional construction had to be delayed. 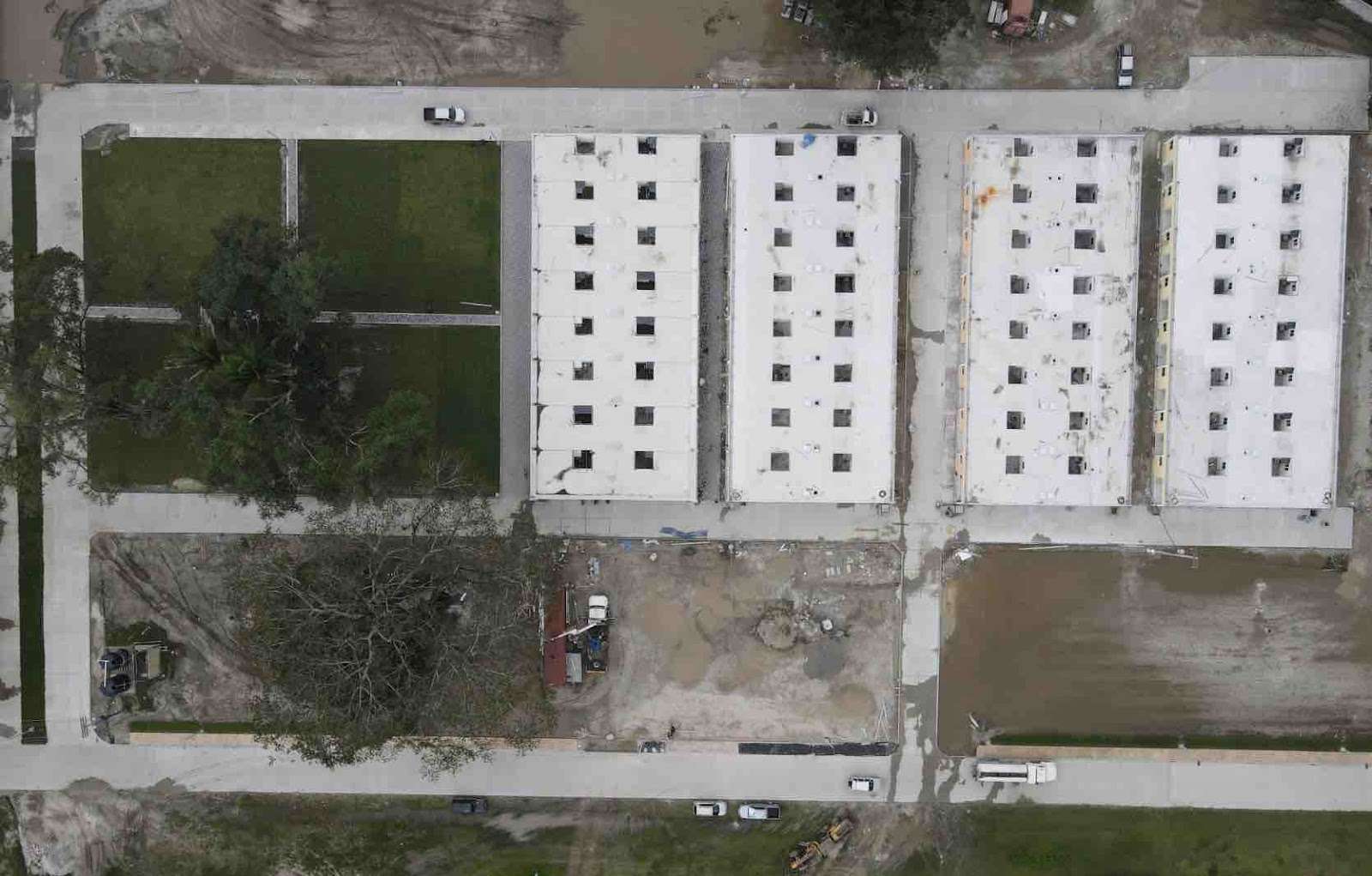 At the time of writing, April 2022, a total of 64 houses are almost complete and ready for rental, but it is unknown how many people will move in without the expected industrial jobs. The result is that Rosa has had to lay off her employees as construction has come to an end and workers have started to leave. Rosa continues to serve her remaining customers and hopes that the new government – which ran on an anti-ZEDE platform – won’t crush her dreams.

Rosa’s story demonstrates the opportunity that a ZEDE can offer to hardworking Hondurans who want to pursue their dreams of a better life for themselves and their children. Rosa can’t afford the rent or the regulatory burden of a store in nearby Choloma, even though she has proven her business skills. Honduras is missing out on the talents of people like her who never get the chance to prove what they can do for their communities.

Semi-autonomous zones like the ZEDEs are crucial stepping stones on the path to creating truly free cities. They illustrate how greater freedom unleashes potential and helps lift those with the least resources out of poverty.

← Tales From Cities #2: Antwerp How Free Cities Help Alleviate Poverty →
Manage Cookie Consent
To provide the best experiences, we use technologies like cookies to store and/or access device information. Consenting to these technologies will allow us to process data such as browsing behavior or unique IDs on this site. Not consenting or withdrawing consent, may adversely affect certain features and functions.
Manage options Manage services Manage vendors Read more about these purposes
View preferences
{title} {title} {title}