Ciudad Morazán was conceived and designed with one purpose—to provide a better standard of living for blue-collar Hondurans. It consists of less than 60 acres just outside the industrial city of Choloma in the northern part of Honduras. Although the special jurisdiction provides many benefits to foreign residents, its primary purpose was always to offer poverty-stricken Honduran people a better alternative than fleeing to the United States as illegal immigrants.

Honduras has been known for decades as an area with a weak rule of law, which accounts for its poverty and high crime rate. Choloma, in particular, is known as one of the most dangerous places in the world that is not an actual war zone.

As explained in our recent article on ZEDEs, a few visionaries saw the severe problems of Honduras as an opportunity to build something unique as a solution. The result was the Organic Law of Zones of Employment, called the ZEDE regime in its Spanish acronym. This law created the most advanced legal framework for special jurisdictions worldwide.

Despite the infamous corruption of the political parties in Honduras, the law was passed with legal safeguards designed to protect the autonomy of the ZEDEs. Since providing legal stability was a primary goal of the plan to attract investment to the country, the safeguards included international treaties that would ensure the continuance of the ZEDEs even if a new government came into power and repealed the law that created them.

Unfortunately, the political opposition used disinformation about the ZEDEs to win a national election the year after the first three ZEDEs were launched. However, the three existing ZEDEs, Próspera on the island of Roatán, Ciudad Morazán in the industrial region, and Orquidea in the agricultural south, are testing the strength of the legal protections, despite the law being repealed.

Although each ZEDE uses the law to introduce different kinds of innovations, Ciudad Morazán is arguably the most threatened by the new government because its primary innovation is in how people live and work together. Próspera has been the most publicized because of its business and legal technology innovations, and Orquidea’s innovation is in agribusiness that is successful even without residents.

The ZEDEs are not a threat to Honduran sovereignty as claimed because they are subject to the Honduran Constitution, treaties, national oversight, and criminal law. However, they have a great deal of autonomy to build civil and commercial institutions, as long as those institutions don’t violate human rights or the Constitution.

The most outstanding value that Ciudad Morazán offers is voluntary, contract-based governance. This allows it to create better civil and commercial rules and regulations under its incentive to provide better public services. As a for-profit city, the ZEDE must attract voluntary tenants to survive. The relationship between the city and all tenants, whether industrial, commercial, or residential, is contractual, meaning that the city can be forced into third-party arbitration if it doesn’t fulfill its promises — a significant improvement compared to regular municipalities.

Ciudad Morazán provides the public services of infrastructure, security, and conflict resolution under free market competition, which forces discipline. For example, there are no zoning laws, so the city can make better, more flexible use of the land to please its customers, the tenants. It builds warehouses, factories, offices, homes, roads, sidewalks, parks, public buildings, and everything needed for a full-service city.

Because of competitive pressure, Ciudad Morazán has had to find innovative ways to provide services like sturdy housing, water treatment, drainage, and waste management at lower prices than in surrounding areas. 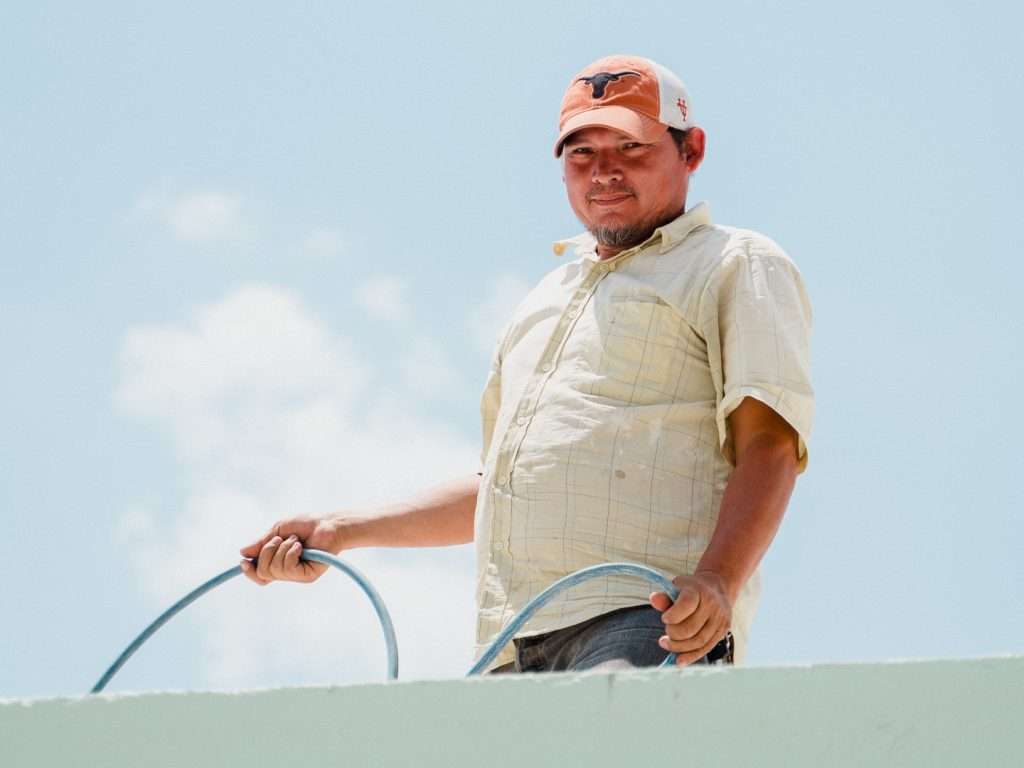 Security is an essential service due to the high crime rate. There are many gated communities or buildings in Honduras, but they are considered a luxury of the rich. So Ciudad Morazán had to find a way to make it affordable for working-class Hondurans.

It is not just about the wall around the city. Innovative software that helps restrict entry while causing the least inconvenience to the people who live and work in the ZEDE is essential. The crucial difference is that the ZEDE law allows a private police force that keeps both criminals and corrupt police from preying on the residents.

Unlike other cities, which must accept anyone who wants to live or do business there, including criminals, Ciudad Morazán selects the residents through an application and vetting process. Moreover, since the relationship is contractual, the tenants agree to the rules and regulations before they decide to apply. This helps enforcement of the relatively few and commonsense rules. 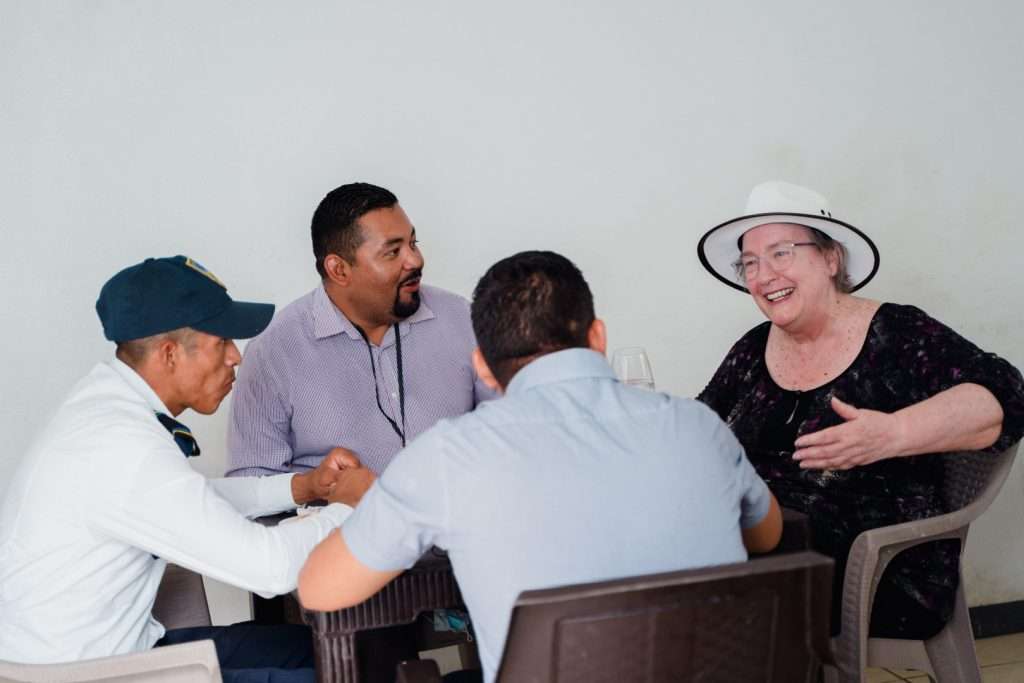 The author, Joyce Brand, having breakfast with members of Ciudad Morazán’s security team

For example, one of the rules is to keep the community clean. In most jurisdictions, littering laws are simply revenue tools. Ciudad Morazán considers a clean environment a crucial value for the community. If tenants violate this rule, they are not just fined; their lease is not renewed.

Most jurisdictions fund their services through a myriad of taxes and fees that can be changed at any time without the approval or consent of the people who pay them. In contrast, the contract with Ciudad Morazán specifies that the only tax is five percent of income. The amount is reported and paid to the ZEDE rather than the national government. From this tax income, the ZEDE remits twelve percent of that revenue to five different government agencies without the personally identifiable information of the tenants. The remaining 88 percent is used to fund the services contractually provided by the ZEDE.

Since the primary purpose of the ZEDE regime is to create jobs for Hondurans, Ciudad Morazán uses several means to attract industrial tenants who create those jobs. There are thousands of Special Economic Zones (SEZs) worldwide that provide tax incentives to attract investment. As a next-level SEZ, the ZEDE also starts with tax incentives. However, experience has shown (even in Honduras) that tax concessions are not enough by themselves to compete for direct foreign investment.

The most important benefit the ZEDE provides its industrial tenants is a lower regulatory burden. The regulations are fewer and more straightforward, which means there are fewer approvals needed from Honduran bureaucrats. For example, industrial tenants can import machinery not otherwise allowed in Honduras.

Ciudad Morazán has its own customs office and is located near Puerto Cortes, one of Central America’s most critical deep-water ports. By streamlining the import, export and shipping procedures, the ZEDE allows tenants to save on not only customs duties but the costs of regulatory compliance. In addition, there are no restrictions on nationalization into the Honduras jurisdiction, meaning that goods manufactured or assembled in the ZEDE can be sold in Honduras rather than having to be exported to other countries.

With these savings, industrial tenants can afford to offer higher salaries than in the rest of Honduras. The minimum wage In Ciudad Morazán is ten percent above the national minimum wage.

The industrial tenants can also afford to comply with the simplified labor statutes. For example, Honduran law requires businesses to pay specific severance amounts to terminated employees, but the employee must enforce that law through expensive Honduran court proceedings. Ciudad Morazán’s labor regulations are less costly to administer, but one requirement is for businesses to maintain severance pay in escrow accounts, which solves a common problem for the worker.

Attracting productive labor is a major benefit for industrial tenants, and that better labor is attracted by the benefits Ciudad Morazán offers workers. Allowing workers to live near the industrial area in a walled city is an enormous benefit for both the workers and the factories. The factories don’t have to worry about workers being able to get to work, and the workers save significantly on transportation costs. The superior housing and security inside Ciudad Morazán attracts better labor as well as saving on costs for both factories and workers. 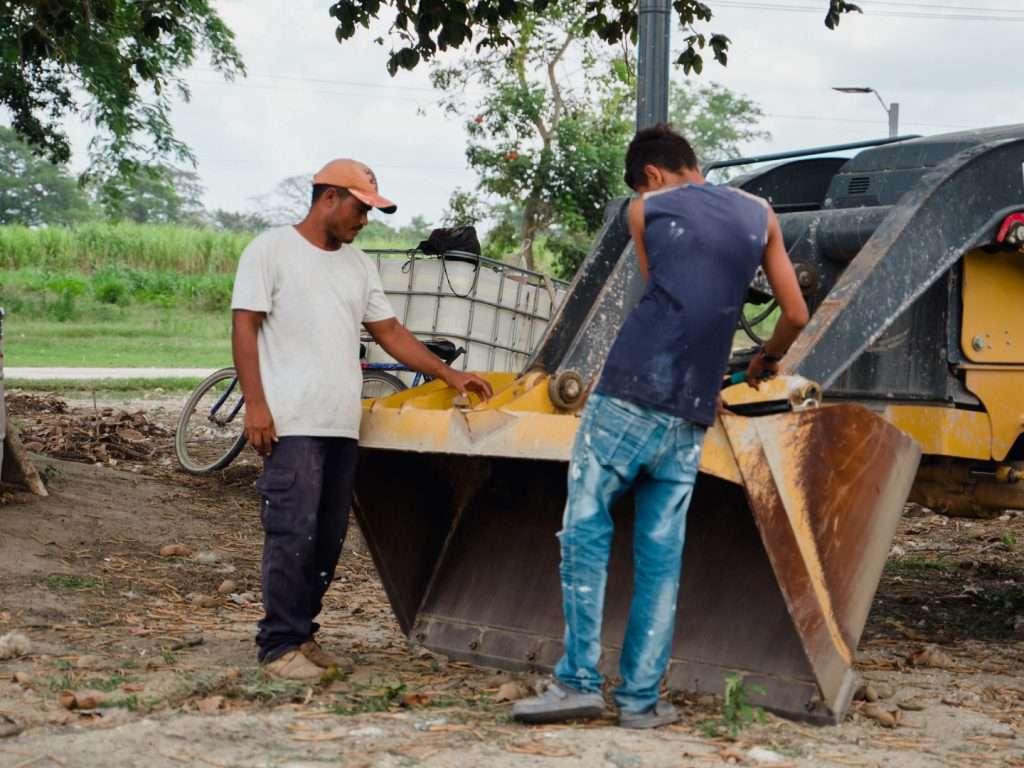 The ZEDE encourages entrepreneurship by making it easy to start a small business. In contrast to the complex and expensive process in the rest of Honduras, registering a new business in Ciudad Morazán takes only 24 hours and costs only $10. Potential enterprises don’t have to worry about high costs, burdensome regulations, or dealing with corrupt bureaucrats. They are also protected from the criminal gangs that extort business owners in the surrounding area.

The ZEDE law includes a provision that Honduran communities can vote to join a ZEDE if they wish. However, Ciudad Morazán operates under a business model that is 100% voluntary. Therefore, it could never accept a group of people who were not unanimous in their desire to live or work in the ZEDE and who could not be individually vetted as not being criminals.

Although the ZEDE law allows the establishment of a completely different legal system from the rest of Honduras, Ciudad Morazán simply encourages third-party arbitration rather than using the Honduran civil and commercial court system. But, of course, if both parties to a dispute prefer to take their case to one of the notoriously corrupt Honduran courts rather than a third-party arbitrator, they are free to do so.

Another privilege of a ZEDE is to regulate the use of currency in its jurisdiction. In line with its commitment to the freedom of its tenants, Ciudad Morazán leaves the issue of currency unregulated so that any two parties can use whatever money they prefer for their transactions. This means that alternative currencies like cryptocurrencies can be used by willing traders but cannot be mandated by legal tender laws.

One of the plans of Ciudad Morazán for attracting jobs to Honduras was to market to companies in Asian countries with political instability. The legal protections of the ZEDEs under international treaties were expected to ensure that these safeguards for investors would mitigate the notorious political instability of Central America. However, the well-publicized reluctance of the current government to honor those protections now calls that expectation into question. Only time will tell whether Ciudad Morazán will be able to use the ZEDE law to continue to benefit Hondurans.

Even if Ciudad Morazán is dissolved by the current Honduran government or the political uncertainty proves fatal to the business model, the ZEDE concept of autonomy can be a model for other jurisdictions that are more committed to the economic development of their country. Despite its early building stage, Ciudad Morazán has already shown how large and small businesses can benefit from voluntary, contractual governance. As proof of concept, the Honduran ZEDEs are a significant part of the growth of Free Cities worldwide.

← Las ZEDEs de Honduras: Pasado y Futuro Free Cities as Plan B →
Manage Cookie Consent
To provide the best experiences, we use technologies like cookies to store and/or access device information. Consenting to these technologies will allow us to process data such as browsing behavior or unique IDs on this site. Not consenting or withdrawing consent, may adversely affect certain features and functions.
Manage options Manage services Manage vendors Read more about these purposes
View preferences
{title} {title} {title}